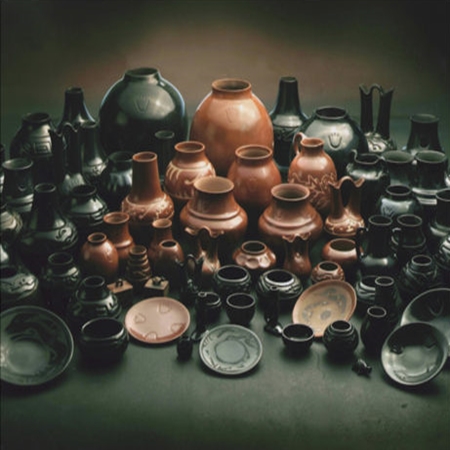 Chris Youngblood is a great-grandson of Margaret Tafoya and a son of Nancy Youngblood.  His mother, Nancy, taught him to make pottery. He has won the “Best of Class – Youth Award” at Santa Fe Indian Market and the prestigious “Best of Pottery” in 2014.  In the 2010 Native People’s Magazine, he was featured as one of the “Generation Next Emerging Potters” and recently featured in Native Art Magazine in 2016 as one of the “Three Potters Under 30” to watch.  His “Best of Pottery” jar was featured in the book “Spoken Through Clay.”

Chris Youngblood says that he focuses on each piece, taking the time to work on the shape and stone polish the surface to a high shine, often polishing it several times to get it right. Chris comes to the clay focused on expanding the technical and artistic boundaries of his illustrious family.  His manipulation of the clay surface through his technically inspired imagery expands the art in new directions.

Charles grew up in Estes Park, Colorado and while in High School worked at his parent’s gallery, Serendipity Trading. He received his BA from the University of Colorado and his MBA from the Thunderbird School of Global Management. He worked overseas and then in 1996 opened King Galleries. The goal has been to create a gallery which represents work by potters and artists who create the highest quality and inspire the greatest innovation in their art.

Charles King has been a judge in various years since 1996 for pottery at the most prestigious Indian art events, such as Santa Fe Indian Market, the Heard Museum Indian Market, and Gallup Ceremonials. He has also given numerous talks on Pueblo pottery at the Heard Museum, Museum of Indian Art and Culture (MIAC), the Carnegie Museum, the Ceramics Research Center- ASU, the Pueblo Grande Museum, Rockwell Museum of Western Art, The Philbrook Museum and The Denver Art Museum. He has also worked closely with various museums for pottery exhibitions over the years. He advises various auctions houses and museums to assist in the authentication of work by historic pueblo artists, which are then either sold or donated.

Charles served on the Board of Directors of the Indian Arts and Crafts Association (IACA), which has the mission of encouraging and preserving authentic Indian art. He was elected in 2008 to the Board of Directors for SWAIA (Southwest Association for Indian Arts), which is the group which puts on Santa Fe Indian Market.  His first book, Born of Fire: The Life and Pottery of Margaret Tafoya, was published in 2008. This book was published in conjunction with the Carnegie Museum in Pittsburgh, PA and the exhibit has since traveled to numerous other ventures.