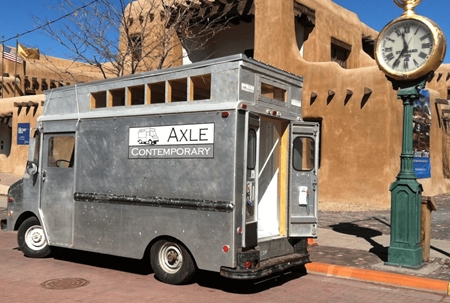 Jason Garcia (Santa Clara), is a contemporary Native American artist in the United States, who was born in Santa Clara, New Mexico. His work has been exhibited the Smithsonian in Washington D.C, the Heard Museum in Phoenix, the Palm Springs Art Museum, and many more. He won the 2018 Mentor Fellowship Award under the Native Arts and Cultures Foundation amongst many others.

He teaches many Native American children at summer programs and elementary schools about the art he creates and techniques he uses. Garcia documents the “ever-changing cultural landscape” of Santa Clara.  He embodies traditional Pueblo techniques with contemporary imagery; combining native stories, ceremonies, and traditions with modern era constructions such as technology. His primary techniques are clay tiles and printmaking, including lithography, serigraphy, and etching.

Vicente Telles is a Santero (painter of saints) and Cultural Iconographer who is driven by the desire to honor the culture and traditions of his native New Mexico. He began painting traditional retablos (saints on carved wood) using natural pigments created from clays and minerals on homemade gesso, which is then sealed with an archival varnish.

Always looking for ways to push boundaries, his style has evolved to include various reinterpretations of traditional Catholic and cultural iconography, which is evident in his social commentary retablos and his on going border culture series. His experimentation with different mediums such as textiles, high quality paper(s), found and repurposed materials are used to create more contemporary pieces.

To Telles being a Santero and Cultural Iconographer is so much more than painting; “being a Santero and Cultural Iconographer means being a teacher, a student, and an observer of tradition and maker of the contemporary.” In this way, his Santos and contemporary pieces transcend religion, allowing Telles to do his part to keep his heritage and centuries of tradition alive and vibrant.

Telles’ work can be found in private and public collections both in the United States and abroad.