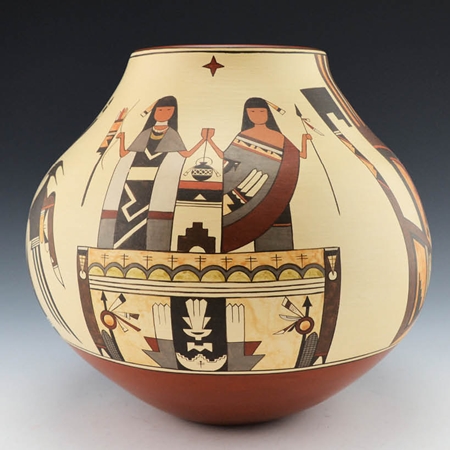 Juan de la Cruz is a son of noted potter Lois Gutierrez and a grandson of Petra Gutierrez. His aunts are potters Gloria Garcia (Goldenrod), Minnie Vigil, and Thelma Talachy. Juan de la Cruz follows in the tradition of his mother, Lois and is now one of the few potters at Santa Clara Pueblo who continues to create authentic polychrome pottery. Each of the different colors on his pottery is derived from different clays collected around the southwest! Few potters are willing to take the time to find different clays to create various colors. Juan is known for his paintings and illustrations, and now he has begun to paint his story illustration on pottery.  While Juan is new to the pottery world, he most recently won “Best of Pottery” at Gallup Ceremonials in 2017 and again in 2109.